A plant’s genome is the full complement of inherited genetic information. Within this set of instructions, individual genes are being discovered that control critical traits with breeding applications. As new discoveries are made, we will describe them in short summary articles as “Jewels in the Genome” (Iezzoni, 2010). This article reviews genetic variation affecting the structure of tomato flower clusters.

The Genetics of Compound Inflorescence

A study by Zack Lippman and colleagues used patterns of inheritance in a process called genetic mapping to isolate variant forms of two genes that affect the structure of tomato flower clusters. Flowers are found on modified shoots, the inflorescence. In most cultivated tomatoes short branches terminate in a flower; then another short branch is initiated, which in turn terminates in a flower. The zigzag branching pattern repeats a few times before terminating, resulting in a cluster of a few flowers.

Botanists, plant breeders, and hobby gardeners had long known of wild tomato species and heirloom varieties with an inflorescence structure that kept iterating to form elongated clusters of flowers in a herringbone pattern. This variant form was given the name “compound inflorescence” (Fig. 1 bottom) to distinguish it from the normal “simple inflorescence” (Fig. 1 top). Genetic notation was assigned based on the “normal” or wild-type pattern, S or s+ for simple and s or s– for the compound allele. 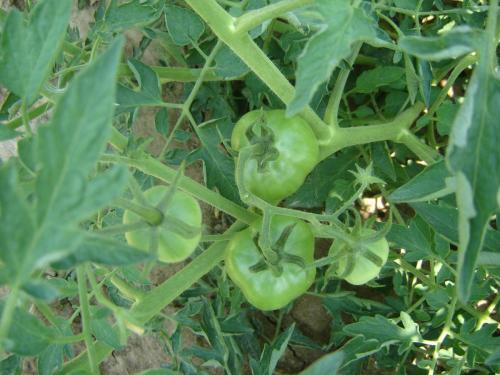 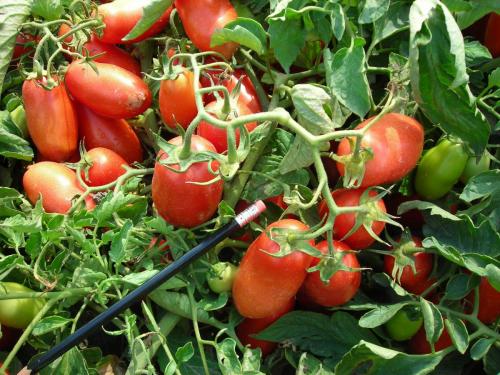 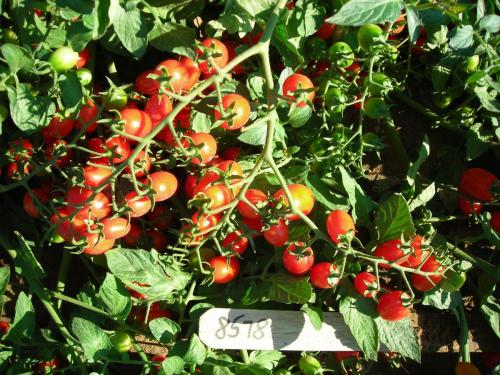 Transferring pollen from a wild tomato (Solanum pimpinellifolium LA 1589) carrying the s allele to a normal parent (M82, a selection from UC82, processing tomato) produces a hybrid with normal flower clusters, and subsequent self-pollination of the hybrid leads to a population that segregates in the classical Mendelian pattern in which three out of four progeny have a normal infloresence and one out of four have elongated flower clusters.

The process of genetic mapping follows the inheritance of hundreds of DNA markers that differ between the original two parents. Markers that fail to assort independently of s serve to identify which of tomato’s 12 chromosomes carries the gene. As each chromosome may carry as many as 2,000 to 3,000 genes, patterns of co-inheritance (or genetic linkage) are used to narrow down the position within the chromosome.

The s gene was localized to a region of chromosome 2 that was being studied as part of the international tomato genome sequencing effort, a project that aims to piece together the genetic code of tomato. The genetic mapping process narrowed the possible genes down to three, all coding for genes called transcription factors. Transcription factors act like on/off switches to regulate the process through which DNA makes RNA (transcription). Because RNA is translated into proteins, and proteins provide the machinery that mediates biochemical synthesis and development, regulating the transcription process leads to changes in phenotype. The transcription factors belonged to different classes; two were Apetala-2 (AP2) and one a Wuschel-homeobox (WOX) family member.

Variation in flower number, from solitary flowers to hundreds, is modulated through changes in the timing of floral fate. Mutations of S fail to terminate the branching pattern, and the compound inflorescence forms as a result. Genetic background affects the expression of the S phenotype, which means there is more to the story as the genes which modulate S remain to be discovered.

There is a practical application to describing the causes of trait variation at the level of DNA sequence variation. Sequence variation that is linked to traits offers a supplemental tool for plant breeders to use in selecting desired types. The idea of marker-assisted selection (MAS) has generated interest among geneticists, plant breeders, and farmers, but the technology has not yet realized its theoretical potential. There are technical challenges, cost barriers, and limitations to the number of DNA markers available for many crops. Despite these limitations, plant breeders working in the Solanaceae—the plant family that includes tomato and potato—are optimistic. Perhaps one reason for this optimism stems from the fact that tomato breeders were early adopters, having used markers to select for nematode resistance for three decades.